In recent months, there have been presentations at some of the big Internet gatherings by Time Warner Cable engineers about IPv6-only access networks. The first was by Wes George at IEPG/IETF in October 2013 (slides). The second was by Lee Howard at RIPE 67 (video, slides). Seeing these presentations reminded me of my own foray into this realm a couple years ago.

It was January 2012 and I was living in an apartment complex. I figured this WiFi dense area was the perfect proving ground for an IPv6-only test network. I wanted to make sure as many of the client operating systems offering IPv6 at the time were supported. Few of the big players support RDNSS, so I decided on DHCPv6 to issue the addresses and DNS information. This covered Windows, Mac OS X, and iOS, but not Android (issue). The DHCPv6 server issued the IP of the then nascent DNS64 resolver at Hurricane Electric to ensure clients would be able to access the legacy Internet transparently. I fired everything up and started watching the DHCPv6 server logs and the traffic flowing through the router. Within half an hour, I was seeing an iOS device and a Windows device using the link.

The twist in this story lies in what I chose for the SSID of my new test network: JJ5-send-cookies (JJ5 being my building and unit number). I figured my choice would attract attention to the network and make for more interesting data. What I didn't count on was coming home from work a few days later and seeing these on my doorstep: 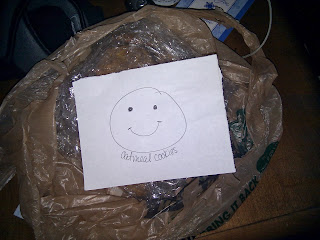 Yes, folks, those are honest-to-goodness home-baked oatmeal cookies. I could hardly believe it. I was feeling pretty pleased with the experiment as I ate these treats, but it turns out these folk were really generous. Over the next month, I would occasionally find more treats when I returned home. Usually they were cookies, but there were even a couple of cakes! The last of the deliveries was at the end of February (apparently from a different party) in the form of a gift basket of cookies, crackers, and chocolate: 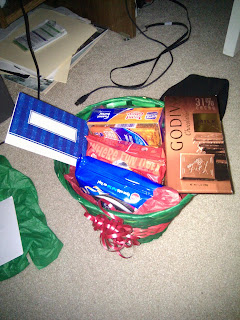 I left the network up until June when I started to pack things up to move to a house. By the end of the run, nearly two dozen devices had received DHCPv6 leases. An IPv6-only network was a success... a tasty, tasty success. Victory truly is sweet.
Posted by Nivex at 18:04